Those who know me, know that I struggle with making sure I get pictures of places I go and things I see.  Well, lucky for y’all, I’ve been working on that.  You’re welcome.

Though, most of the photos are landscape photos, some have really amazing buildings in them, but Austria doesn’t allow photos of a lot of the places I’ve been able to tour.  So sad, I know.  But, I can tell you all about them!

Anyway, I will tell you about Salzburg through my photos and hopefully capture some of the magic I experienced.  Although, because of all the rain I was worried I would see more of the ground in Salzburg, rather than the spectacular sights and not get any photos.  Not to worry, I just found my way inside a museum that had an incredible balcony.

Any yes, this is a little late in the making. 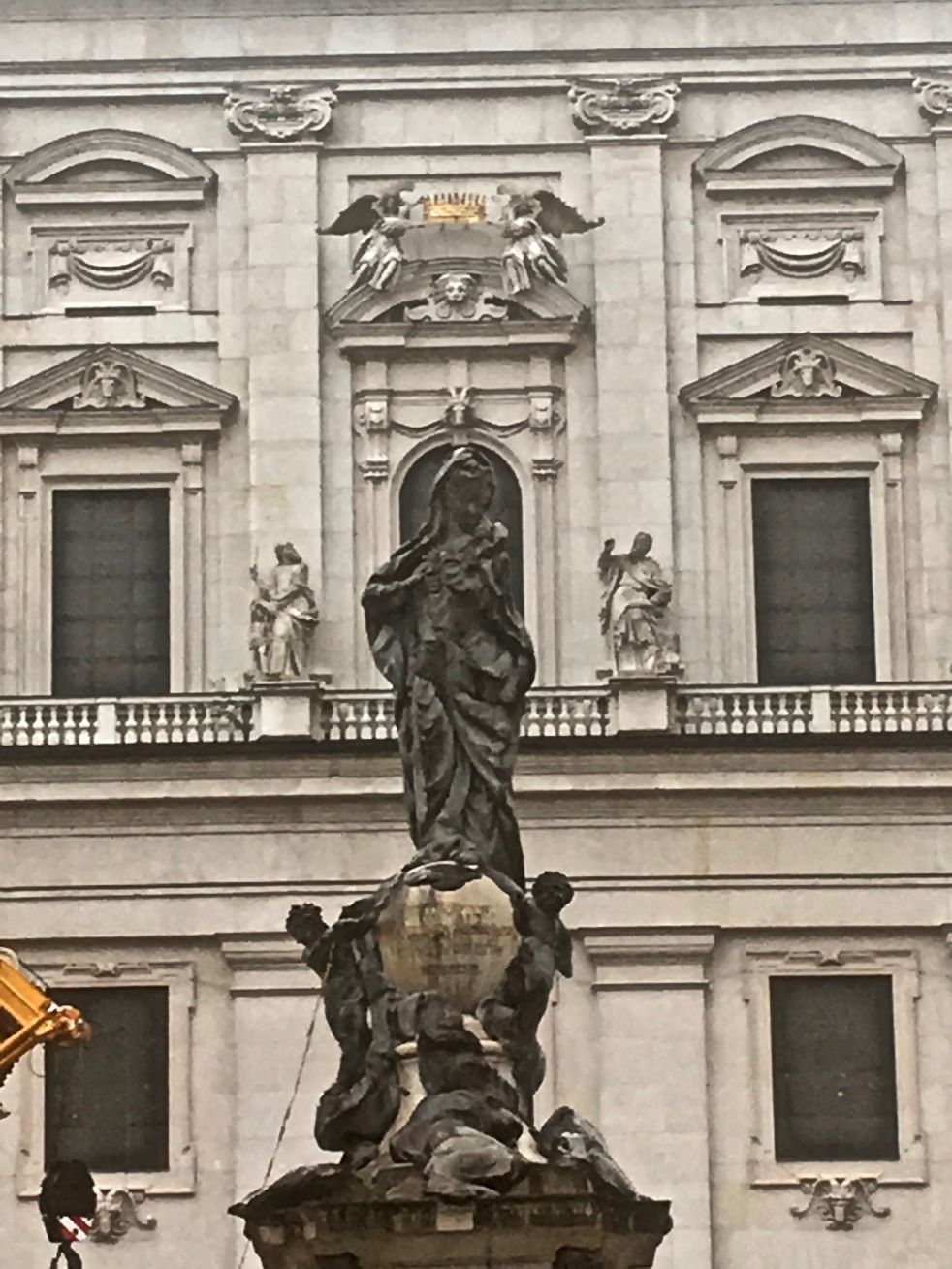 You’ll have to forgive the graininess of this photo, I only had my phone. Taken in front of the Dom (Cathedral) in Salzburg.  This statue was made by (or commissioned by) the people of Salzburg and put in the public square as a sign that they honored Mary and God, not just the Prince, who also happened to be the Archbishop at the same time (Prince Archbishop Franz Joseph).  The most captivating part for me is when moving in a specific direction far away from the statue and Dom, the angels on the Dom are holding a crown and in the right spot, it looks as if they are crowning our Mother.  Hence the grainy picture…tried to get the right effect.

This is another one of the famous “squares” in Salzburg.  This is the horse fountain that is so famous from the Sound of Music movie.  Behind me (from where I was standing taking the pic) are a lot of restaurants, cafe’s, shops, and touristy destinations. 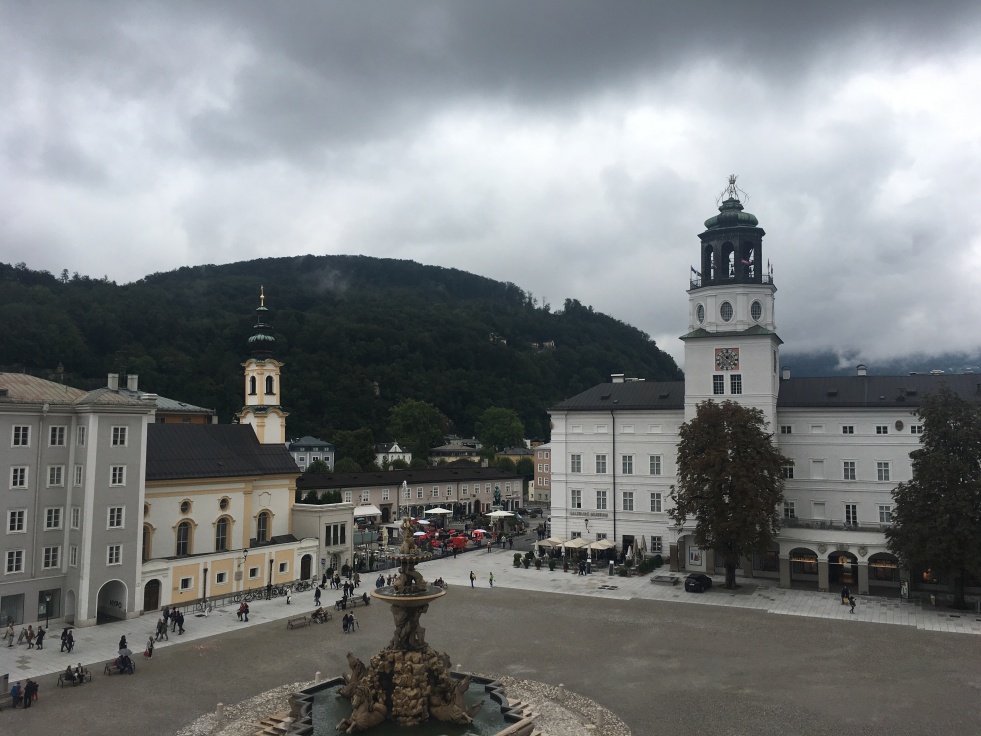 This photo is overlooking the square in which I was standing in (previous photo) and is taking inside the museum of the Dom and the Prince Archbishop’s home and art collection. 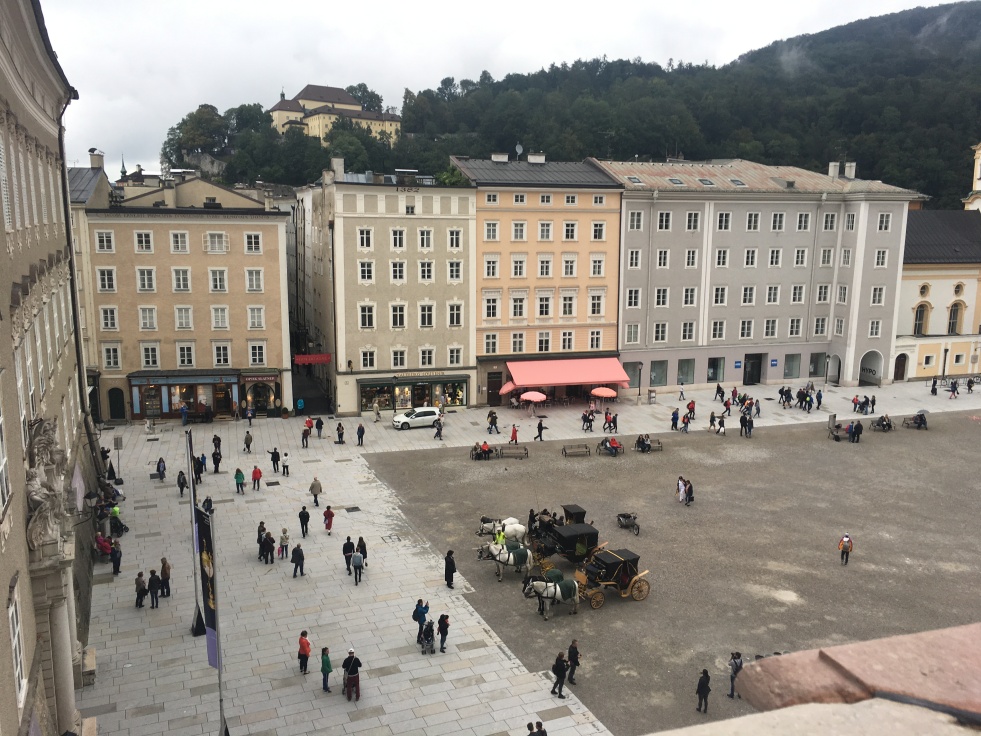 Another photo from the same balcony…saw the horse carriage rides they were offering and wanted to get one so badly.  Waiting until Krakow, words on the street is that they’re the best there.

These next photos are from the garden that belonged to the Prince Archbishop’s mistress’ home.   Although this home was more like a miniature castle. Now open the the public, the gardens are a largely touristy location.  This is the famous walkway/arch that was in the Sound of Music.  Got to walk through it!!  Because it was raining and is the end of summer, not necessarily the best pics, but I was able to get a few cool shots.

Really liking the whole walkway effect so I found these trees and thought is was a cool pic idea.

These nome statues are in the same garden, but they are actually images of important political figures at the time during which they were made (I forgot, sorry).  Interesting fact, they are considered the birth of caricature. 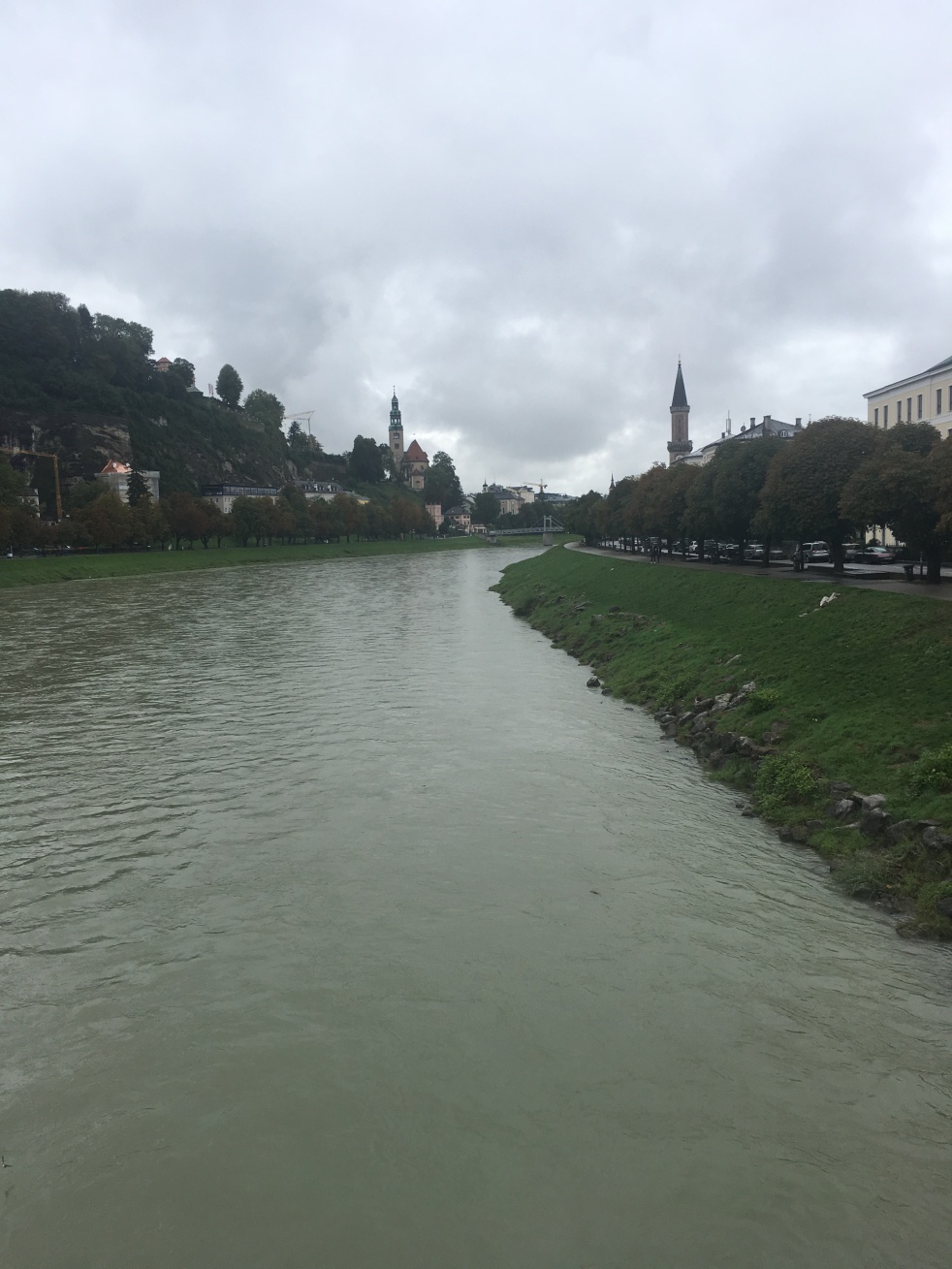 View of river from the lock bridge in Salzburg…there were river boat tours I was extremely tempted to go on.  Definitely, not enough time to see all that I wanted to and not the nicest day for touring a city on foot. 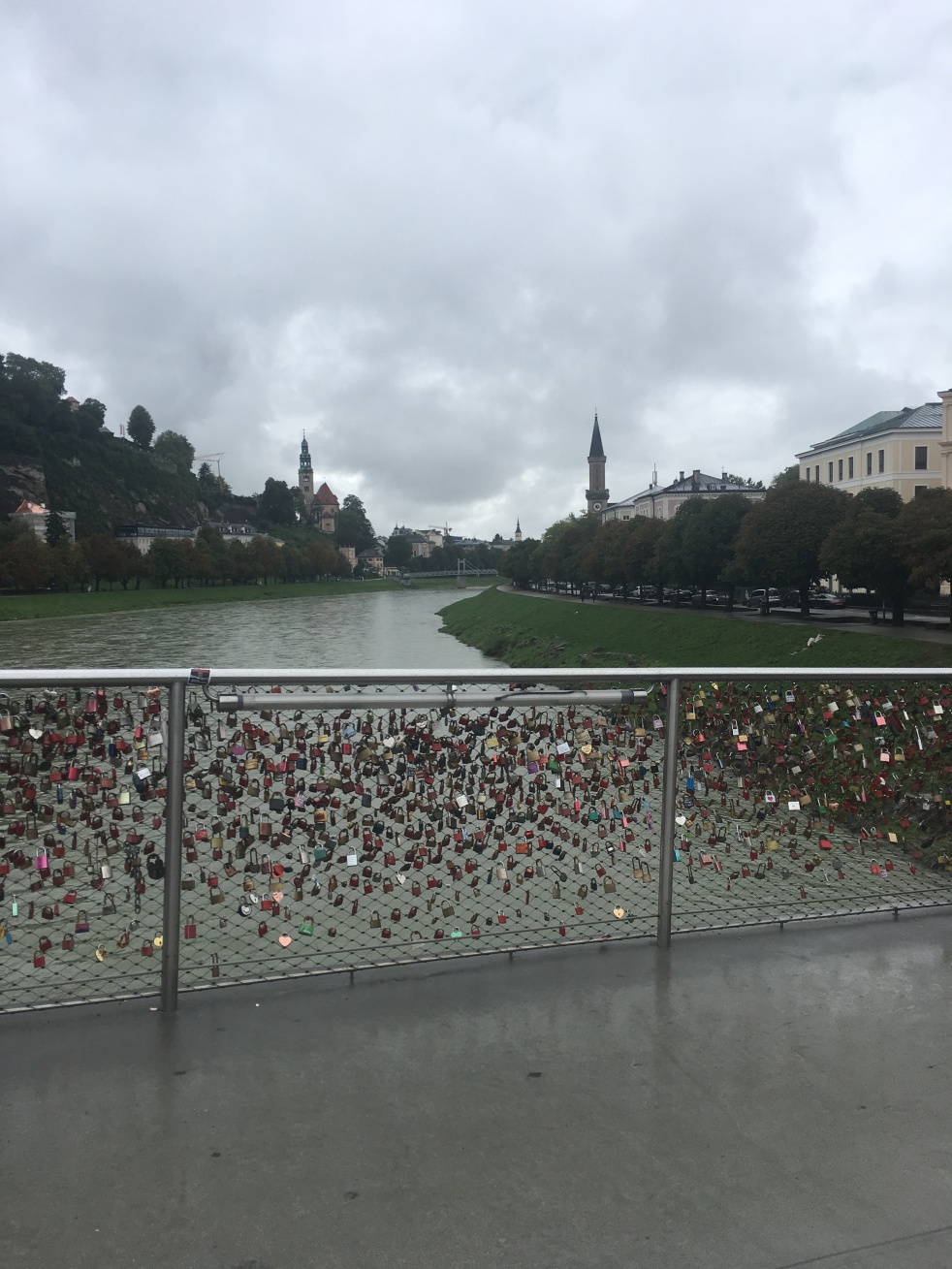 This is the famous lock bridge in Salzburg, not the one is Paris.  They are actually asking people to stop putting locks on it because it is getting so heavy, the bridge is starting to get compromised.

Mozart’s birth home, there is a museum, I didn’t get a chance to tour it.  He lived here for a couple of years and then moved kitty corner to a different house. 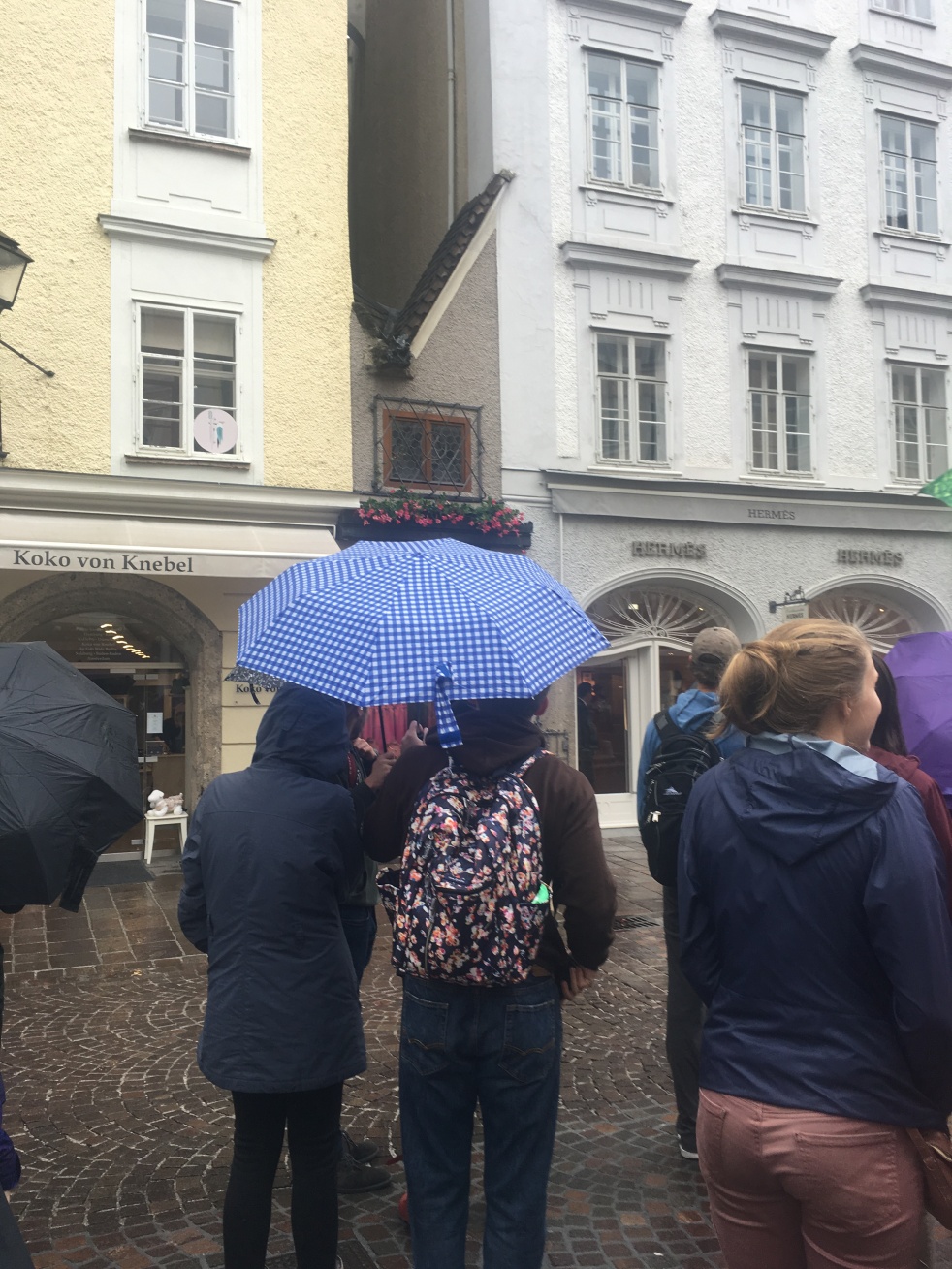 Can you see it?  Smallest home in Salzburg…possibly the world (don’t quote me on that).

These next images are some pieces of artwork that I found captivating and wonderful.  No pictures were allowed to be taken in the museum, so these are all from internet sources.

This first one, well I couldn’t find the photo of the three on display at the museum, but this gives you and idea of what it is.  There are three crosses, like on Golgotha, laying on the floor.  Christ’s cross is in the middle and the two sinners, now saints, are on either side.  When there, one is able to see the outlines of ribs, markings of wounds, outlines of what little clothing there was, and the position of the bodies (as artists imagine/take artistic liberties).  It really is a beautiful piece and I am going to keep searching until I find the proper photo.

This painting spoke to me because of how simple, yet elegant it is.  There are angels, with a glorious crown above Mary and the Christ child, and they are seated on a throne of sorts.  Yet, the colors and vibrancy don’t depict the royalty or glorious splendor they are sometimes depicted with.  There are aspects showing their glory and their are aspects that also symbolize the poverty they lived with and Christ coming to the world to live as one of us.

Now this painting, it completely captivated my attention and this is the painting I got caught trying to take a photo of, I simply forgot the rule and just had to somehow remember this painting.  Trying not to get too personal, I feel as though this photo accurately describes some of my relationship with faith and religion.  The title says it all.  A computer photo really doesn’t do it justice.

On a completely different note: I learned more about how paintings were made at this museum than I have anywhere else.   At the beginning of the art exhibit they have some of the techniques and materials painters used and continue to use to paint, so when looking at paintings I could look up close and see more detail, but when looking far away, so of those details are lost.

Also pretty sure there were some first class relics!

There it is folks! Salzburg, Austria.  I have so much more to say about it, but this will have to do for the meantime.